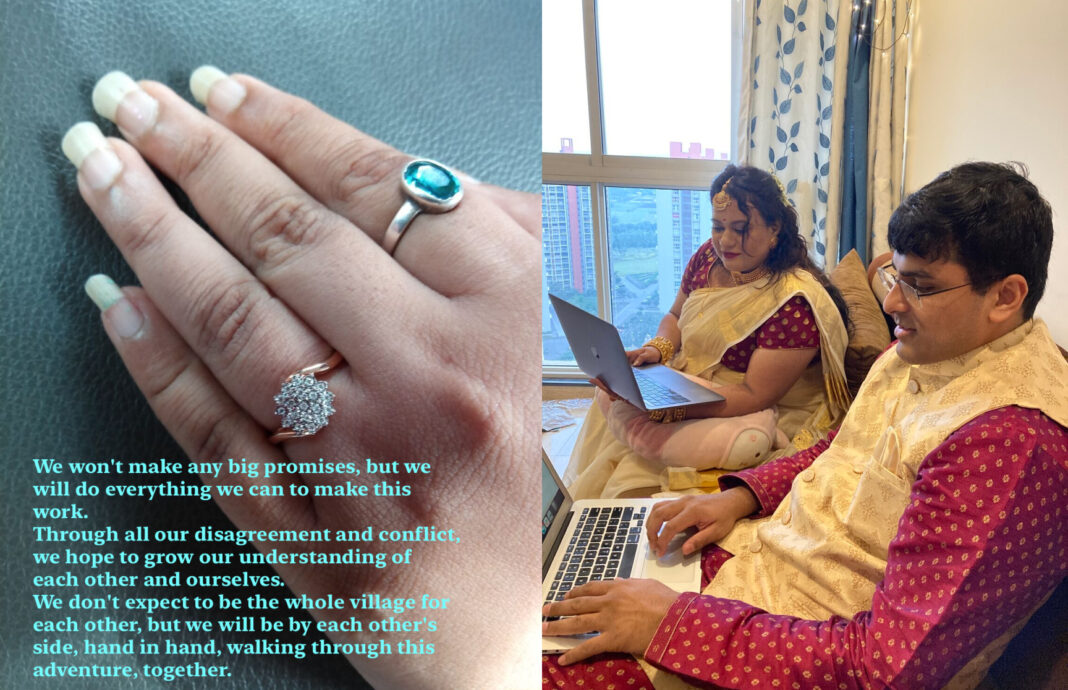 Cryptocurrencies and NFTs are buzz words these days, In fact, the craze has been such that people across the globe have been hosting virtual weddings. Now, an Indian couple has created waves by organising their wedding virtual, what has been called as India’s first blockchain wedding.

“We also decided to immortalize our union using blockchain technology,” the groom Anil Narasipuram wrote on LinkedIn, adding that the couple wanted a small intimate ceremony amid the pandemic.

Soon after their court marriage in November 2021, Shruti Nair and Anil Narasipuram, both cementing their union using blockchain technology through an ‘Ethereum smart contract’.

In an online ceremony, they exchange their vow, their wedding was officiated by ‘digital priest’ Anoop Pakki. The couple sealed the deal “with an Ethereum smart contract that consecrated  commitment to each other in the form of an NFT minted on OpenSea”.

“We won’t make any big promises, but we will do everything we can to make this work. Through all our disagreement and conflict, we hope to grow our understanding of each other and ourselves,” their vow on the NFT read. “We don’t expect to be the whole village for each other, but we will be by each other’s side, hand in hand, walking through this adventure, together,” they promised.

To create the NFT that is permanently linked to a piece, encrypted with the user’s signature – they used a photo of the bride’s engagement ring with the vows embedded in the image. The special token was named ‘ekatvam’, which means ‘oneness’ in Sanskrit.

Explaining the process, Narasipuram, wrote that they set up Metamask wallets and their digital priest “minted the NFT on OpenSea” and transferred it to him. With guests joining in to witness the event on Google Meet, the couple read out their vows and after receiving a ‘blessing’ from the digital priest, the groom confirmed the transaction to transfer the NFT to his wife’s digital wallet.

“Shruti and I sat next to each other on our laptops and completed the transaction in a 15-minute ceremony officiated by Anoop,” he wrote, sharing a few pictures of their special day. “The transaction took a few minutes (and about $35 in ETH gas fees) after which we were pronounced husband and wife by our digital priest!” said Narasipuram.

The priest confirm the wedding by reading: “By the power vested in me by Ethereum, it is my honour and delight to declare you married.” “The transaction is a permanent, immutable and public record of our commitment to each other on the ETH blockchain,” Narasipuram added.

The blockchain wedding is new concept, Last month, Indian couple had gone viral after they decided to take the Metaverse route to tie a knot in what was a Hogwarts-themed virtual wedding, another a US couple during their traditional Jewish ceremony exchanged virtual rings (NFTs) using their smartphones and took social media by storm.