Sneakers That Can Mine Bitcoin and Show Bitcoin Price

The shoe costs 1 BTC and can only be purchased in bitcoin. 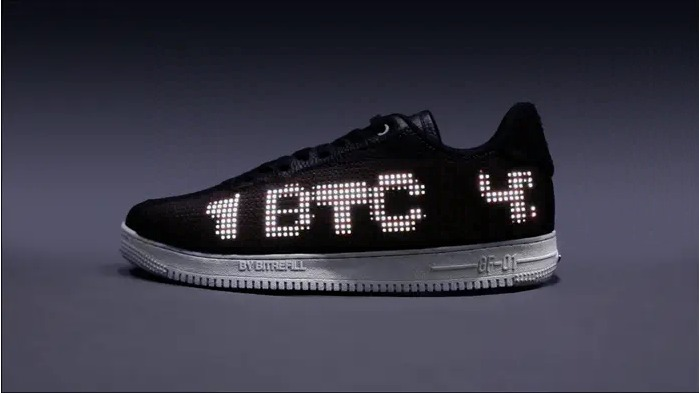 Bitrefill a Stockholm-based company, launched a tech sneaker that displays real time price of Bitcoin and block height of bitcoin. The sneakers have cellular internet connectivity with a 3G connection embedded into an app-controlled flexible LED-matrix screen with a full node and mining rig built into the shoebox.

The cellular data is free in 154 countries and the LED turns purple once bitcoin hits $1 million. However, the mining rig that is embedded into the shoebox, allow “extremely slow” Bitcoin mining. The shoe costs 1 BTC and can only be purchased in bitcoin.

Bitsneaks launched the world’s most high tech “shoe” after partnering with the NBA player Spencer Dinwiddie. Dinwiddie said, “Being able to create the most technologically advanced shoe in the world with Bitrefill has been a lifetime experience.”

“Living on Bitcoin is a lifestyle statement, and lifestyle statements are often expressed through fashion. This is something that many companies in our space are starting to realize – this is why we see Formula 1 sponsorships, Superbowl ads, and branded sports arenas… Some companies have already realized it, the rest will have to follow.” Said Bitrefill’s CEO Sergej Kotliar

Kotliar further added – We have a kick-ass team with… mad coding skills, and, it turns out, even a bit of hardware skills… So we decided to build something. A statement. Something that speaks to and celebrates our core user base – the people who live on crypto… We wanted to build something so that the people that we know are cool can look the part.”

“In the same way we believe our services at Bitrefill.com must be 10 times better than our competitors, when we made a sneaker, we wanted it with 10x the coolness of anything else,” said Sergej Kotliar, founder of Bitrefill,

The limited-edition Bitsneaks are available for pre-orders at bitsneaks.com starting Wednesday, April 13 at 3 PM CET.