El Salvador plans to build the world's first "Bitcoin City", funded initially by bitcoin-backed bonds, which will be free of income, property and capital gains taxes, 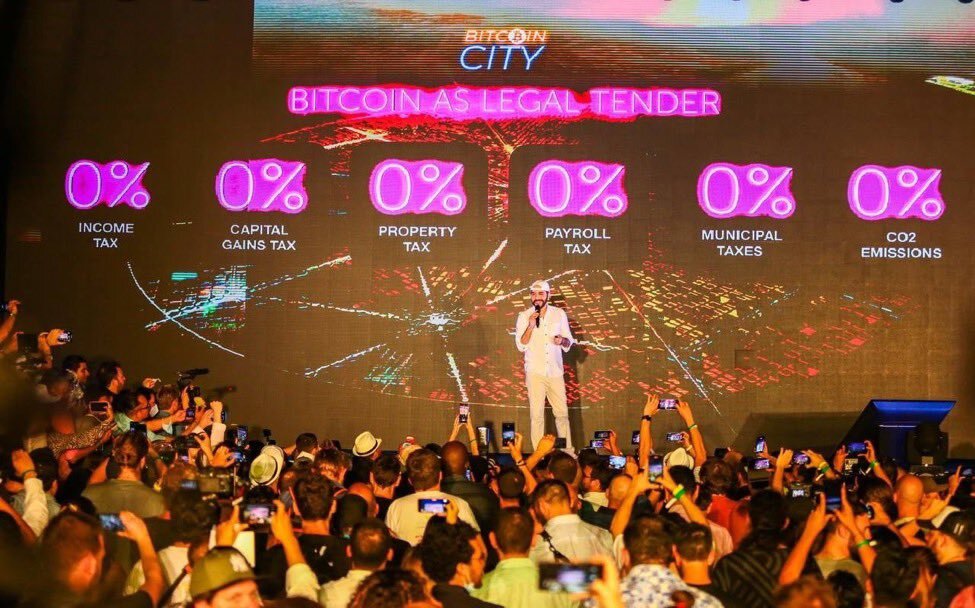 El Salvador plans to build the world’s first “Bitcoin City”, funded initially by bitcoin-backed bonds, which will be free of income, property and capital gains taxes, President Nayib Bukele said on Saturday, in the beach town of Mizata to a crowd of cheering Bitcoin enthusiasts. Bitcoin City will be built near the Conchagua volcano which will provide energy for mining,

“Invest here and make all the money you want,” Bukele said in English, dressed all in white and wearing a reversed baseball cap, in the beach resort of Mizata. “This is a fully ecological city that works and is energized by a volcano.”

Half of the funds of the so-called “volcano bond” will be converted to Bitcoin and the other half will be used for infrastructure and Bitcoin mining powered by geothermal energy, the public infrastructure would cost around 300,000 bitcoins, Mow said, while sharing the stage with Bukele.

We're excited to share our collaboration with the Republic of El Salvador for the #BitcoinBond, an issuance of $1B USD in tokenized bonds on @Liquid_BTC for acquiring #bitcoin and building out energy and mining infrastructure in El Salvador. 🌋⚡️ https://t.co/rDaCDdewSo pic.twitter.com/3VAC6MISSl

After a 5 year lockup period, the government will begin to sell its Bitcoins and pay an additional dividend to investors, Mow said. He told Bloomberg News on Thursday about his proposal.

Blockstream models show at the end 10th year of the bond the annual percentage yield will be 146% due to Bitcoin’s projected appreciation, Mow said, forecasting Bitcoin will hit the $1 million mark within next five years. He said the lockup period on the bonds is designed to take $500 million in Bitcoin out of the market for five years, adding to their scarcity and value.

The plans will make “the financial center of the world” and “the Singapore of Latin America,” Mow said, adding he expects other countries to follow suit. “The first countries that do this will have a massive advantage. This is the beginning of nation state Bitcoin “fear of missing out,” Mow said,

The only tax in Bitcoin City will be a 10% value-added tax to fund city construction and services, he said.